‘Drink small to save little wineries’

Nicole Sierra-Rolet of Chêne Bleu (below) argues that small is beautiful, but endangered, and puts in a plea for us to ‘drink small to save little wineries’.

As the principal of our family winery in the Rhône Valley, I’ve spent lots of time, like many lately, in front of the Zoom camera, diligently participating in all those helpful pop-up programmes and learning to host virtual tastings. [See Richard’s guide to some of the best – JR] But behind the camera I can’t take my eye off the tsunami of red ink heading straight for the income statements of wineries like ours. As a former financial analyst and director of think tanks – before I lost my heart to the wonderful world of wine – I feel I ‘know too much’ about the potential scale of the financial fallout that awaits us collectively.

I fear in particular for many small wineries. The enfolding commercial consequences of COVID-19 have already created big winners and losers in the wine world, along new divisions never previously delineated: off-trade bonanza v on-trade debacle; companies with great e-commerce platforms v those stuck in analogue purgatory, having relied instead on face-to-face relationships; companies which have courted and tracked their end-consumers v anyone who entrusted middle-men with all their sales; supermarket and chain retailers with lines around the block v small independent wine shops struggling to get foot traffic and to figure out home deliveries. But I’m concerned that another equally dangerous dichotomy is now surfacing: the growing disparity in the circumstances of small wineries v bigger commercial ones.

Just as in the medical world some people with those dreaded ‘pre-existing conditions’ are earmarked for a particularly rough ride, I’m afraid that in our own beloved wine world, size does matter: ‘small’ may well be a marker for extra risks and bigger challenges, unless we consumers come to their rescue. With some luck and a little empathy from wine enthusiasts, we can, I hope, crowd-source a helping hand for those small wineries most in need.

So let’s brace ourselves for the bad news first, the stuff that’s keeping me awake at night and making me a lot less happy than I look below. 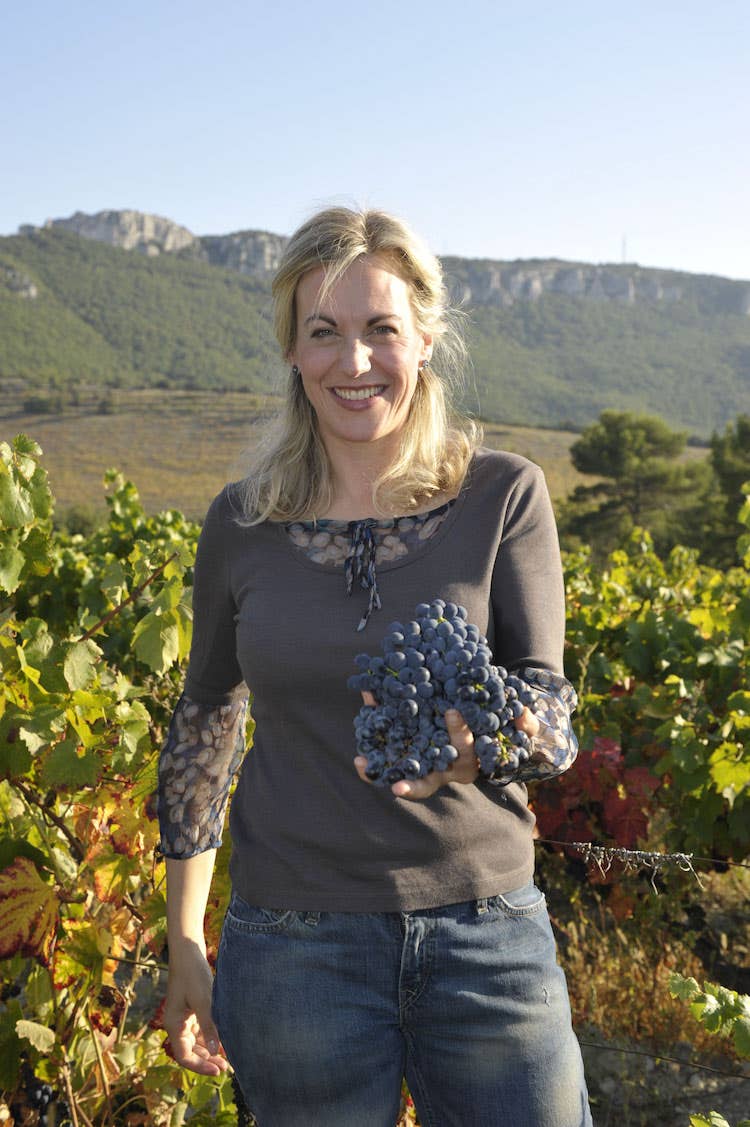 The cost base of small wineries, even in a good year, is notoriously unenviable, and net margins low or non-existent, except for a few famous châteaux and the most successful California wineries, the usual suspects. If you’re small you probably have high, fixed production costs, because typically you own and operate your own land, and tend it by hand, often favouring expensive organic practices over cheaper chemical short-cuts. In contrast, négociants and many bigger companies usually buy grapes or juice and can modify the quantity of wine they make to match anticipated demand. Smaller companies mainly rely on seasonal working capital loans because cash flow is constrained even in a good year, and our cost of capital is generally higher than that of the larger companies by several basis points. In France, the government coronavirus-related ‘aid’ on offer is mainly in the form of liquidity loans, likely to cripple finances further down the road so should be used only as a last resort.

Small wineries have little de facto flexibility on labour costs since our employees are either family or like family. Plus the fine print in the seemingly generous French furlough laws excludes eligibility for most winery jobs, deemed ‘essential’. In our Vaucluse region, whacked by record frost at budbreak, many wineries are now scrambling to catch up with runaway Nature because of the sudden good spring weather, but without the seasonal hired help from abroad, locked down in their own countries.

Our big-ticket sales and marketing costs are mainly wine fairs, and those payments were sent in long before the coronavirus hit. For example, we were headed, along with a posse of other Ventoux producers, to present at the wonderful Hospice du Rhône biannual event in Paso Robles. It was going to be our Big American Coming Out party, prepaid, two years in the planning, and now postponed like everything else.

Then on the commercial side, things won’t be much easier. Those perniciously low net margins mean that if you’re small you’ll find it hard to suddenly have the time, money or staff to implement all those clever social-media campaigns, e-commerce solutions and digital transformations recommended by pundits to capture direct-to-consumer interest and opportunities. Or at the very least you’ll be late to the party.

You’re busy reaching out to your sommelier friends and restaurateurs who are even worse off than you for the moment; you have a symbiotic relationship with them, you all need and like each other. Your local independent retailers are all over the place commercially, some sinking in despair, others swimming in sales, though rarely do they have the technology and delivery know-how to make it a seamless cellar-to-doorstep experience.

You probably don’t sell much or anything through supermarkets, the playground of large-volume commercial brands, so you’ve likely missed out on the burst of panic-buying sales by self-isolators. Luckily there are notable exceptions such as WaitroseCellar.com in the UK. The buyer, Xenia Irwin MW, goes out of her way to offer, on their e-commerce platform, a selection of small-production ‘fine and rare’ wines not available in quantities suitable for widespread distribution in their stores.

At the winery, your tasting room is of course closed, and so is your wine hospitality accommodation if you have any. Your only hope is exports. The dynamic Pierre Saysset, who represents our syndicate of independent wine producers in the Rhône, reports that on average 10% of our sales are at the cellar door, 15% at consumer wine fairs, 15% to the local trade and 30% to négociants. All of these avenues have been stopped in their tracks. The remaining 30% to exports is patchy and depends on how diversified your markets are – again, much less so in the case of most small wineries. The 150 producers he surveyed reported sales down between 60 and 80% already. He reckons about one-third might not make it without some drastic measures.

And even when demand does come through, disruptions in transportation are likely to disproportionately affect small-scale producers. Typically they rely on smaller vehicles and companies for pick-up from their more remote locations, as opposed to bigger wineries who often own their own fleet of trucks and/or have warehouses conveniently located near ports, etc. Reka Haros, whose family owns Sfriso Winery in the Veneto, almost literally missed the boat on a vital shipment to the US, which had to be re-routed, with killer delays.

And post pandemic? Once the restaurants that survived open again, they will likely have healthy stocks of wine and will not be replenishing any time soon. Plus, small wineries making premium and super-premium wine will be caught in the economic down-draft of whatever recession awaits us at the other end of this experience, when people have traded down, suggesting a dreaded U-shaped recovery instead of the desirable V-shaped one. For wineries there might be some regional variations. In our part of the Rhône, even small vintners often produce all three colours of wine and the reds will likely hold their value, whereas further south some wineries produce only rosé, which has no sustained commercial shelf life.

According to some of the online winemaker round-table discussions organised recently by Pauline Vicard, principal of the Areni Global Institute for the Future of Fine Wine, which I chair, history also suggests that in times of uncertainty, wine consumers find risk-taking and experimentation less palatable. People retreat to conservative choices from established regions, and well-known brands at the expense of the small and the new. Exceptions to the small-winery debacle are rare/collectible/tradable investment-grade wines, still meeting with enthusiastic demand from the super-rich. Jamie Ritchie, head of Sotheby’s wine sales worldwide, reports that auction houses achieved record prices this month. Meanwhile collectors are feverishly scouring lists of rare fine wines released from the cellars of top restaurant as restaurateurs look to recover some cash.

Of course, not all is bad. Small companies of all types can often be nimbler in a crisis; small wineries in all countries have experience of navigating the vagaries of weather and markets. And another silver lining: small wineries are generally more likely to farm organically or sustainably. Being outside as the bees busy themselves and cover crops are in full bloom is a great antidote to these new economic and organisational stresses. We are all learning that mental health is so crucial for reacting constructively to challenges, and nature reminds us that one way or the other, this too shall pass.

With luck, cooped-up city dwellers will also rush to visit bucolic vineyards as soon as they are released from captivity, and small rural wineries which offer some form of hospitality should benefit from that enthusiasm. Pundits predict that consumers will be eager to eat and drink local, and small wineries epitomise those values. Many of those experts agree this crisis is accelerating mainstream awareness of the crucial nature of biodiversity conservation and sustainability, which I personally hope will play a greater role in the consciousness of both the trade and consumers as they assess the worthiness of a fine wine. At Chêne Bleu we are working on a road map to share with other committed wineries who want to use bees to help their vineyards thrive.

So do you enjoy the diversity and craftsmanship of smaller producers? At this juncture, what could wine enthusiasts, and other stakeholders such as distributors, influencers, etc do if they want to help stop this train wreck?

Well, perhaps you can be persuaded to support small winemakers until they get back on their feet by seeking out their wines. Consumers who care can put their money where their mouth is, literally. At parity of price, style, region or variety, they can surely find suitable choices from smaller producers. So if you care, DRINK SMALL, or forever hold your peace!

‘Drink small to save little wineries’
Are you sure you want to clear all?
Step 1